Become a part of the history of the Kappa Kappa Psi and Tau Beta Sigma Headquarters!  Since 1992, brothers and sisters across the country have memorialized their membership, special occasions and awards by purchasing a brick for the Walkway of Distinction.  The walkway surrounds our headquarters in Stillwater’s historic Santa Fe Railroad Depot.  Hundreds of bricks have been installed over the years and you too can be a part of this tradition.  Each brick is only $50.

The following document is the collection of the Risk Management Policies of Kappa Kappa Psi & Tau Beta Sigma: 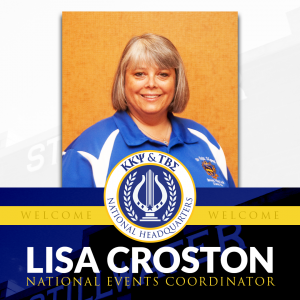 Lisa is very knowledgeable about both organizations and will be deeply involved in the planning and execution of both national and district events, including the 2021 district conventions and the 2021 National Convention next July.

We are looking forward to adding Lisa’s wealth of knowledge to the NHQ staff, starting in September. Welcome Lisa!

The National Headquarters is open Monday through Friday from 8 a.m to 5 p.m., Central time (except during the summer, when the office is closed on Friday afternoons between Memorial Day and Labor Day), and someone is almost always in the office during those hours. If you need to talk to a person, be sure to call then.

Most likely they are in the mail to you or are still being processed. As a rule, you should allow at least four weeks for processing of new active membership cards: one week for your mail to arrive at National Headquarters, a week (or even two, depending on the volume of mail) for processing your report and printing the cards and/or shingles, and another week for the shipment to get to you. If you have not received your materials after 4 to 6 weeks, then call or email the Membership Services Coordinator at hqsec@kkytbs.org.

It could be, however, that they sent them to you but they were returned to us because the address we had on file for your chapter was wrong or out of date. Make sure your Chapter always has a current mailing address and email address (preferably a kkpsi.org or tbsigma.org email address) on file at National Headquarters. If we have to re-send your chapter a package that was returned to us due to the chapter’s failure to pick up the mail or provide us with the correct address, then your chapter’s account will be charge for the additional shipping costs.

Once your cards are shipped, the UPS tracking number will be posted in the comments of your form.

Sometimes it’s the small things that get you: You might be familiar with checks, but you get stuck writing out the amount. Writing a check with cents is especially tricky, but with a little bit of practice, you’ll soon be able to do it without thinking.

IMPORTANT: WHEN WRITING A CHECK, ALWAYS WRITE CLEARLY AND NEATLY! Also, always use a black or blue ink pen – all other colors cannot be read by scanning equipment used by check processing companies.

Write the name of the person or business that the check is going to. (i.e. “Kappa Kappa Psi” or “Tau Beta Sigma”)

For example, assume you need to write a check for eight dollars and fifteen cents (that’s $8.15).

Using our $8.15 example, write the following:

Write everything together on one line so that it reads “Eight dollars and 15/100.”

Now that you have the basic idea, let’s look at the example in more detail.

No “cents”: You might notice that the word “cents” doesn’t appear anywhere—you don’t need to use it when writing a check. It is sufficient to simply put the number of cents into the format above. If you want, you can certainly write “fifteen cents,” but it’s easier and faster to use the fraction format. Plus, your check probably has the word “Dollars” at the end of the line, so it would not make sense.

It might help to think in terms of percentages: The word percent comes from a Latin term that roughly translates to “per 100.” That’s why cents are called “cents”—each one is one percent of a dollar. Another way of looking at it is to consider that each cent is one one-hundredth of a dollar. When you write a check, you note how many dollars the check is for, including whole dollars as well as partial dollars—or cents.

**It is VITAL that the number written in box 3 matches what you write out longhand on line 4! If they do not match, the bank will either reject the check, or submit it for the amount written out longhand.**

Make absolutely sure that you sign the check! For checks written on the chapter account, the check will need two signatures for the bank to accept it – Treasurer and President/Sponsor/Director of Bands. Each chapter has their accounts set up differently as who the second signer is on record with the bank.

Always document what the check is being written for in the memo line (#6 on the picture).